5. (15 points) An alien spaceship from the planet Kepler 62f is in search of a rocky planet for a remote base. They’re attracted to Earth because of a fortunate coincidence: its axis of rotation points directly at their home planet. That means they can have uninterrupted communication with home by planting fixed transmitters on The North Pole. But first, they need to find out if Earth’s axis will always point in the same direction or if it undergoes precession. They can’t know without years of observation, so they hope that we, its now-extinct intelligence, have left behind the answer. While orbiting Earth, they see a few remarkable structures, including the Hoover Dam in Nevada. Zooming in on the dam, a colorful plaza with peculiar markings on its floor catches their attention. Descending on the plaza, they realize the markings are a map of the sky when the dam was built, left to indicate the date to posterity. Figure 1 is an overhead architectural map of this plaza. The center-point depicts the north ecliptic pole, and the large circle represents the path of the Earth’s axis throughout its counter-clockwise procession. As they interpret the map, they’re dismayed to realize that their star has not been and will not be Earth’s north star for very long. 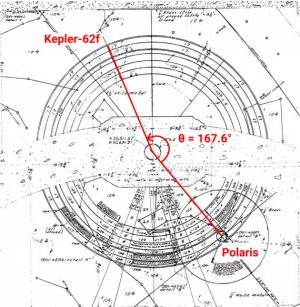 For the purpose of this question, assume that the Earth’s axial tilt is a constant $$i = 23.5^{\circ}$$ and its axis precesses at a constant rate.

a) Using the values on the map, and knowing that the aliens used carbon-aging to determine that the dam is 12,000 years old, find all possible values for the period of Earth’s axial precession.

b) Using the most optimistic answer (longest period) from part (a), calculate how many arcseconds the Earth’s axis precesses each day. Use the period you calculate here in the next two sections.

c) If they hadn’t been lucky enough to come across the star map and decided to build a radio interferometer to observe the movement of the celestial pole over the course of 30 days instead, how many kilometers would the baseline of their telescope array have to be, assuming it operated at a 20cm wavelength?